The Isle of Man Aircraft Registry is pleased to be attending the 9th annual Isle of Man Aviation conference at the Villa Marina, Douglas, Isle of Man on Thursday 27th June 2019.

Now in its ninth year, this Martyn Fiddler event has become a must-attend for all business aviation industry professionals and continues to attract a large, high profile audience from across the industry worldwide, working in regulation, manufacture, operations, ownership and management.

The team are delighted to announce Graham Williamson as conference chairman for the second year running. Until recently Graham was responsible for all TAG Aviation Operations in Europe and the Middle East.  He joined the company in November 2005 as Director of Operations and was later promoted to Managing Director of TAG Aviation (UK) Ltd with additional responsibility for Flight and Ground Operations across Europe.  He was subsequently promoted to President TAG Aviation Europe. Graham left TAG at the end of October 2018 to embark on an exciting new adventure, launching a new Irish aircraft management company based at Shannon airport in west Ireland.

This event has become an important gathering point for the business aviation industry. Attendees can meet Government Departments that help make the business aviation community unique and a success, and hear first-hand from Simon Williams, Director of Civil Aviation, Isle of Man Aircraft Registry.

Register for the event now to take advantage of the early bird offer! 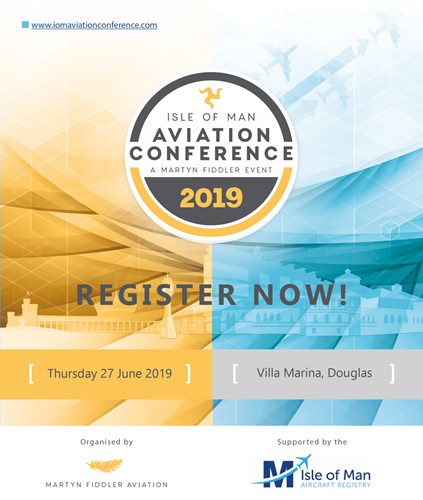