Information and data for flight crews to use on the flight deck has traditionally been in paper format but now much, if not all, of this information is available electronically.  The Electronic Flight Bag (EFB) is an electronic storage, retrieval and display system designed to replace traditional paper products in the cockpit. EFB devices can also store and display a variety of aviation data or perform calculations such as performance and mass and balance considerations. The scope of the EFB system functionality may also include various other hosted databases and applications. Physical EFB displays may use various technologies, screen sizes, formats and forms of communication.

The use of an EFB introduces a wide variety of hazards and risk that must be carefully managed.

The IOMAR categorises an EFB system as either ‘portable’ or ‘installed’ (replacing the previous Class 1, 2, and 3).  .

Contrary to common perception, the application process for use of installed EFB’s on M-Registered aircraft is considerably simpler than most applicants initially thought, requiring less supporting documentation than portable EFB’s. The IOMAR fully encourage the use of flight crews taking advantage of the full functionality of installed EFB’s where possible.

At the point of dispatch a minimum of 2 sources of terminal/approach charts must be available together with at least one of all other required aircraft documents.

‘Electronic Flight Bag’ (EFB) is an electronic information system, comprised of equipment and applications for flight crew, which allows for storing, updating, displaying and processing of EFB functions to support flight operations or duties.

‘Portable EFB’ is not part of the aircraft configuration and are considered to be PEDs. They generally have self-contained power and may rely on data connectivity to achieve full functionality. Modifications to the aircraft to use portable EFBs require the appropriate airworthiness approval depending on the State’s regulatory framework.

'Critical phases of flight' in the case of helicopters means taxiing, hovering, take-off, final approach, missed approach, the landing and any other phases of flight as determined by the pilot-in-command or commander.’

‘Portable Electronic Device’ (PED) is any kind of electronic device, typically but not limited to consumer electronics, brought on board the aircraft by crew members, passengers, or as part of the cargo and that are not included in the approved aircraft configuration.  All equipment that is able to consume electrical energy falls under this definition. The electrical energy can be provided from internal sources as batteries (chargeable or non-rechargeable) or the devices may also be connected to specific aircraft power sources.

Note: A PED becomes an EFB when: 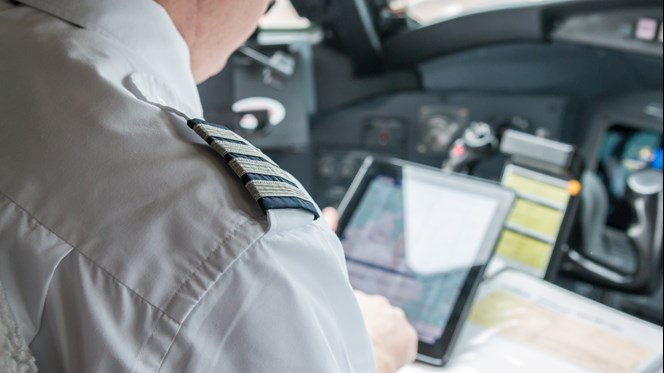 The Isle of Man Aircraft Registry as the State of Registry is required by ICAO Annex 6 Part II & Part III, Section III to “establish criteria for the operational use of EFB functions to be used for the safe operation of aeroplanes/helicopters” and ensure that:

The Isle of Man Aircraft Registry recognises that different regulatory standards prevail and that strict alignment with one of the main regulatory regimes may present obstacles that do not enhance safety.  Therefore, the use of appropriate supplementary guidance from ICAO, EASA or other aviation sources may be used as an aid to meeting these standards.  This may include:

Before applying for EFB approval, see RP4 Part 2 Chapter 5.3 for all the information you may need.

Subsequently an application for the approval of an EFB system should be submitted for each registered aircraft by the Operator/Flight Operations Representative (FOR) on Form 91 which includes the minimum Operational Risk Assessment (ORA) requirement acceptable to the Registry (see RP4 Part 2 Chapter 5.3.5.1).

The ORA should be completed after the EFB system has been assessed by the EFB Administrator against the standards and guidance in this document.

As part of the ORA, the operator must consider the risks associated with a lithium battery fire and the effects of a rapid decompression.

The following information is available to assist the EFB Administrator/Operator.

Lithium batteries are incredibly popular these days. You can find them in iPads, laptops, mobile phones, AEDs, portable power packs etc. Faulty, poorly manufactured and misused lithium batteries can experience something called ‘thermal runaway’.  This results in them getting so hot that they can catch fire, explode and ignite other adjacent battery cells.  Such an occurrence on the flight deck could significantly disrupt the operation of the aircraft and cause serious injury to flight crew. Similarly, if such a thermal runaway occurred in the passenger cabin it could cause serious injury to a passenger or crew member.

There are videos and additional information available online which will provide support and guidance concerning the potential threat of the lithium batteries within an EFB (or PED) overheating, and the action required to manage a thermal runaway.

Some examples can be found below:

Jeppesen have conducted rapid decompression tests for FliteDeck Pro iOS and iPad devices, results can be requested via their website.

Additionally, Foreflight have conducted decompression tests to the RTCA DO-160G specification on many devices, click here for more information.